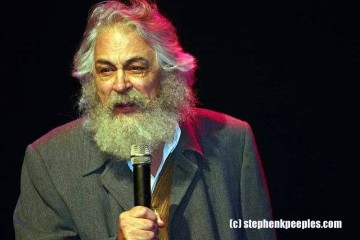 Using a great author’s own words in the tradition of “Mark Twain Tonight” and Emily Dickinson in “Belle of Amherst,” actor/singer John Slade embodies another titan in American literature, Walt Whitman. Twain was the funniest; Dickinson the wittiest; but Whitman was the most inspiring. His times were more divided than our own, but he never lost his faith in America, in life, and the possibility of things getting better.

He’s back to sing, chant, and rap his amazingly modern worldview, preaching from the Gospel According to Walt.

Refreshingly free of the cynicism of our postmodern age, Whitman believed that “even a mouse is a miracle,” that love is the binding force of the Universe, and that human consciousness is “surely headed somewhere” and will only continue to evolve and awaken. Walt Whitman Sings! is part lecture and part Chautauqua-tent revival meeting, and one of the unique features of this one-man concert play is that John has set Whitman’s rolling verses to gospel, folk and hip-hop music!

Above:  Walt Whitman asks “Who Learns My Lesson Complete?” at the Integral Life spiritual conference in Boulder, CO.

Below:  Walt Whitman points out “This is the female form…” in Divine Nimbus (track 7) from the album I Sing Walt Whitman!

Below:  John teaches high school kids to sing Whitman’s “I Hear America Singing”. (He captured the kids on video and added the musical accompaniment later to create the song.)

Before you check out the new website, WhitmanSings.com, see below what people are saying about “I Sing Walt Whitman!” and offer some feedback of your own!

24 Responses to I Sing Walt Whitman!